Know Thyself, Know Thy Species...
‘By acknowledging such links between the inner, psychological world and the perceptual terrain that surrounds us, we begin to turn inside-out, loosening our psyche from its confinement within a strictly human sphere, freeing sentience to return to the sensible world that contains us. Intelligence is no longer ours alone, but it is a property of earth; we are in it, of it immersed in its depths.’
David Abram 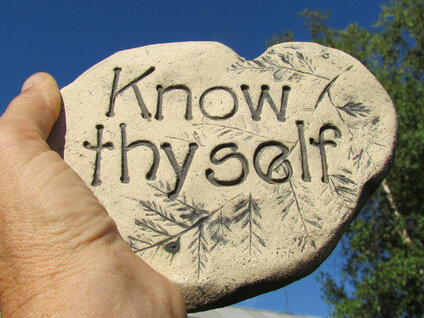 The Greek maxim 'know thyself' has been attributed many meanings by authors and scholars over the centuries. When spoken today, the general precept suggests an understanding of one's own thoughts, feelings, passions, behaviors and motivations. Most people get on-board with the aphorism concluding that the better one's self-awareness, the more choice one has in cultivating a happy life. I am no exception. My self-knowledge journey did not begin until my late 20's, and in response, many opportunities opened before me to learn how my personal past influenced my identity, behavior patterns, self-concept, and protective strategies that were playing out in my relationships. Acquiring such awareness afforded more consciousness, and therefore choice, in each of the above aspects of self. This process still occurs today, and as long as I am gifted the ability to self-reflect, it shall continue until my death.

Yet lately 'know thyself', or 'nosce te ipsum', seems too small to consider the full context of who we are as human beings.  While the growth benefits of examining one's self in the context of immediate ancestry and current societal trends are abundant, I fear they are insufficient for our modern-day troubles. What if we were to re-visit our biological nature and status as Homo sapiens? What if we acknowledge that our current western society lifestyles comprise less than 1% of our species his/herstory? What if we were to recall the egalitarian, mobile, tribal (vs. isolated nuclear family) and nature-based life in which we Homo sapiens lived for hundreds of thousands of years? How then do health failures, anxiety, depression, identity crises, addictions, attachment disorders and complex relational struggles fit into this larger context? Considering our distance from our wild lives and wild spaces, what ails us make so much more sense.

When considering your personal growth and development, I urge you to bring in all the contexts within which you exist - past and present.  Allow yourself to sit quietly on the ground, open your senses and remember your sensuous, animal nature. Human beings are relational beings - and those relationships have always included our human tribe as well as the more-than-human world. It is only recently we have strayed from knowing our wild plant and animal kin in favor of insulated spaces with domesticated pets and plants. Many (unknowingly) suffer from species loneliness. Well, many suffer from loneliness in general.  Yet becoming reacquainted with the flora and fauna friends of your particular place and immersing yourself in local, complex natural communities helps to combat loneliness in any form.

Being a relational human being means being a part of an exchange.  Powerful relationships have a conscious exchange of influence and energy. In a post-modern world where 'control' is the answer to everything, this means we cut ourselves off from being influenced by the natural world and unfortunately, from one another. As a therapist (and modern human), I witness the degree to which children are managed and told to fall in line, but not heard or considered sovereign in their own right. I witness couples smiling and nodding at one another but not truly supporting or connecting. I witness men follow their training to always be in control and to not let anything or anyone affect them (including their partners, children, friends, and crises) yet deep down they are craving contact and connection.  I witness women adhering to their societal introjects of people pleasing and accommodating yet starving to relationally influence the men they care about. When they are not let in, they try harder desiring an exchange but are considered emotional or crazy when no influence is permitted in their men's lives. I witness people of color literally screaming and fighting for their lives yet their voices dismissed in the face of racism. We forget our relational, reciprocal nature.

Deeply immersed in the Anthropocene, the current epoch defined by human supremacy, control and negative impact on Earth's geology, climate and ecosystems, we are at risk of destroying beyond the point of return. All of us are deeply socialized in our roles of control, entitlement, and consumerism and these roles systemically and systematically keep us from being the relational, reciprocal beings that we are. Our roles do not reflect our true, relational nature. We don't know how to liberate ourselves from such constricted notions of who we are and deformed notions of what we need. Nor do we know how to step into a more primal, species role of relationship with all of life.

I invite you to 'know thyself' as Homo sapien, a relational, animal species among hundreds of thousands of species with a 300,000 year history of connection and awareness for the natural world and for our human brothers and sisters.  Be willing to positively influence and be influenced by (versus in control of) your loved ones, your peers, your pets, the birds outside your dwelling, the rabbits nibbling at your garden.  Know thyself as a creature with extraordinary sensory perception abilities and intuitive capacities designed to be applied toward survival and thrival.  Ask and hear what the Earth is telling us about her needs instead of over-focusing on the common concern of getting our personal needs met.

Relational Rewilding nature classes, private programs, ecotherapy, and ecotherapy trainings support youth and adults to 'know thyself by knowing thy species' and to remember the importance of their relational nature on the rest of the world.  The concentric circles of your influence are greater than you think. Join us, just in case you need an engaging and nourishing reminder of your potential.